When I first took adopted my two little rescue kittens I was already very much a cat person.  I love the way they curl up on your lap in the evening whilst you are sat watching the television, the head bunting they do when they are pleased to see you and the padding of their paws on your stomach as they look lovingly at you. I even had an  Animal Sculpture created of a cat, much like the ones you can see at www.gillparker.com But what I was unaware of was exactly how big the cat family is.

There are thought to be over thirty-seven different types of cat, ranging from large to small. Now that would be a lot of cats to have to adorn your home in a variety of little cat knick-knacks that you can find all over the internet. Anyway, back to the cat family. Here are some of the members of this exclusive feline family. 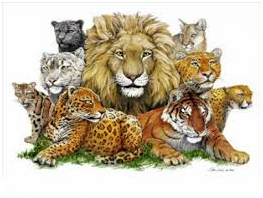 Everyone will have heard of Tigers and Lions and will be aware of their status in the big cat family. In actual fact, the tiger is the largest of all the cat family and this is closely followed by the lion. Tigers are also now on the endangered list across all of the areas that they naturally originate from.

The next three cat types all have very similar fur patterning – the leopard, the cheetah, and the jaguar. Instead of one color or striped fur, these beautiful creatures have round or diamond shaped patches across their fur. Cheetahs are incredible runners and can reach top speeds of around 71 miles per hour, they are very slender animals and can reach up to 1.2 meters in length with a tail that is almost a meter long itself. Their tail is so long because it acts as a rudder on a ship allow them to change direction when running at high speeds.

Domestic cats are the smallest of the feline group and make up the highest percentage of the whole family. There are some other wild cats that in terms of size fit in between the big cats and our small domesticated ones, these include bobcats which are native to the Americas and are around only one meter in length with large paws. They are similar to the Lynx cat but are less likely to be seen climbing trees and swimming which are two traits that the lynx has very strongly.

Did you know that the only continents that don’t have native cats originating from them are Australia and Antarctica?