Tanks have been used throughout history from the first world war through to modern times and these incredible feats of engineering can be seen in an incredible display at the Bovington Tank Musuem. This museum is located on the site where tanks were tested during the First World War and where tanks were returned once their work-life had been completed. The deregulated vehicles were used to train new soldiers on the workings of the tanks and it was quickly realized that it would be worth keeping examples of these for future years and the museum was established, originally just a simple single shed. 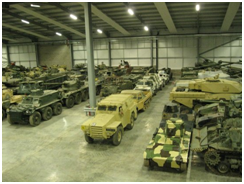 The museum is home to the first-ever tank, nicknamed ‘Little Willie’ and has examples running right from the first world war through to the modern-day. In 1947 the museum moved from the small shed to the world war two building and over 2500 people visited the museum that year. By 1981 the museum housed a total of 120 armored vehicles has grown steadily throughout the years.  With so many vehicles in the collection and having to move their locations damage may happen. The museum needs to keep them as close to the original design as possible so they probably use metal bonding adhesives to fix them from sites such as https://www.ct1.com/.

The museum expanded rapidly during the 1980s and 1990s when purposed built workshops were erected and more tanks acquired, usually through gifting or swapping with other museums and collections. The Steel Hall and Tamiya Hall were both created enabling the museum to expand its collection further. In 1998 the museum created The Trench Experience. This allows visitors to immerse themselves in a trench-like experience, all be it a sanitized museum-based experience. In 2016 a new Tank Men Experience was added as an oral history piece where the stories of the first tank crews are told.

When you visit the museum will enter through the newest part of the building known as the Tank Story Hall. The building is around 50,000 square feet and houses not only the entrance to the museum but also an incredible display hall that was opened in 2009. The Heritage Lottery Fund gave the museum £9.6 million towards the total £16 million costs.

Much like other museums, Bovington is continually looking for funding and ways to expand. Whether this is through acquiring new armored vehicles or by introduced new interactive experiences for the visitors. The museum has entered into a new phase of restoration and it will interesting to see what new additions are added over the coming few years.